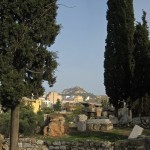 Bifurcation of Time is a collection of text-based works developed during the collaborative, international residency project  Soundscapes Landscapes (City Above Life Below) in Athens, Greece. The project, instigated by Greek media art collective Medea Electronique in conjunction with the Onassis Cultural Centre sought to create a works for a series of site-specific mobile phone walks and a VR experience; the launch is planned for May 2017 as part of Dokumenta Athens.

The chosen location was Keramikos, an area of gentrification, located to the northwest of the Acropolis, which also includes the archeological sites of the Keramikos cemetery and potters’ quarter. Much of my work focused on this archeological site and a very palpable experience of a visible past within the very audible present – the location is surrounded by traffic, suffused my experiences of real tranquility interjected by tour guides. It inspired a series of text based, site specific pieces. Texts were created on location, and recorded in the same location. In them I create an imagined dialogue between a number of famous Greek philosophers, including Plato and Aristotle, in which they discus their views on the body and the soul in relation to death. They were written and recorded in a location where some of these ancient philosophers are said to be buried – and which also marks the beginning of the road leading to Plato’s academy – as ghostly fragments of cultural memory, interlaced with my personal vocal and equally disembodied presence within these recordings. Later, the “audience” will occupy a third temporal node in this bifurcation of time, listening to me talking in the past, about an even more remote time which nevertheless is anchored in the ruins on a visual level.

Below you can find the introductory piece, Bifurcations of Time, written, read and recorded on Keramikos cemetery by Iris Garrelfs