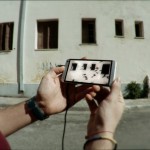 Between 1st November and 8th November I will be in Athens (Greece), participating in the collaborative residency project Soundscapes Landscapes (City Above Life Below).

The projects brings together a group of international artists to work on a joint project for the Onassis Cultural Center in Athens. The project is envisaged to consist of mobile phone based soundwalk and a VR application developed by Medea Electronique.

For an overview of the works created, click here.

This is my first trip to Athens, so I am quite excited. To get started, as we are working in Kerameikos, an area of significance (this being Athens, it might be hard to find an area that is without it…), here are a few links by the way of historical background:

Also, texts about the ancient history of the area, historical architecture and about life and death in ancient Athens. It seems Kerameikos has to do with pottery, so I guess that rings a bell vis-à-vis Littoral Assembly. 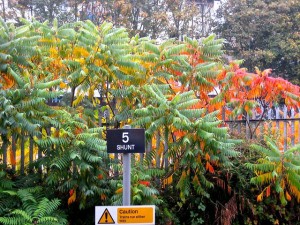 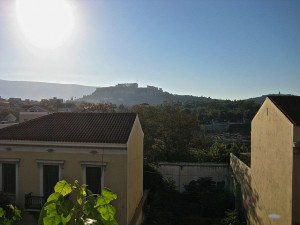 As you can see, the view form the air b&b we are staying at is pretty spectacular, looking right onto the acropolis! and it looks even larger in in real life, rather than the photo.

First ideas are materialising: I am thinking juxtaposing a walk around the cemetery, were ancient luminaries are buried, with texts by the same folk. More later

Today is the first proper working day. Almost everyone has arrived and we are meeting at the Onassis Cultural Centre for a meeting and lunch. 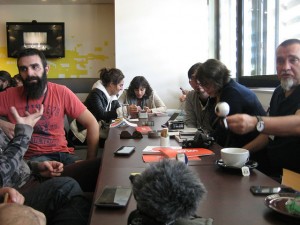 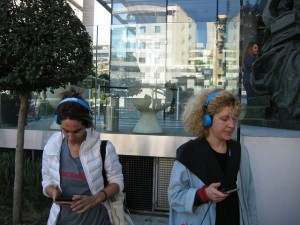 Beforehand, we have a walk around the area, exploring the previous app walk that Medea Electronique have produced. It gives a much clearer idea of what this project is all about! Later on, we are also getting a crash course in the Unity gaming software that the VR app will be developed in. 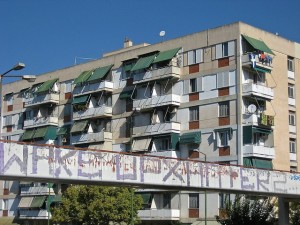 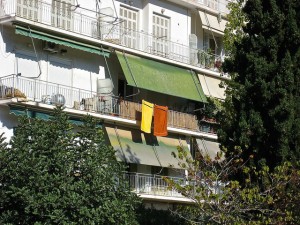 Must try to finally get my mobile phone walks override and In A Day’s Work off YouTube and and into an stream – the streaming option really doesn’t work all that great.

Last night I’ve been doing the first bits of writing about temporal bifurcation that I might be reading and recording in situ later. Today, we have a first perimeter walk around the “target” area and the an exciting exursion to underground areas that are normally off-limits. Reports shall be forthcoming. In the meantime a map of times past.

Lots of stuff happening and very little time to do it in, so I’ll have to leave some blanks for now and fill in later. What I am working on for now are two sound pieces for the Keramikos cemetery: One is a reworking of Lucian’s ‘Dialogues of the Dead”, in which I am creating a series of poems in which the likes of Plato and Socrates relate their views on death and the beyond. The other piece is a juxtaposition of modern and ancient water / sewage systems, recorded on location in a fancy Athens apartment and the ancient underground water network. Also on the agenda today are a visit to the pottery museum, a meeting about a visual idea I have for the VR app and the nightly production meeting/dinner.

I am woefully behind with updating the blog, which was not helped by the fact that was a bit ill. So, updates will have to wait a little longer. In the meantime, here a track I recorded yesterday on location at Keramikos Cemetery. It’s called “Bifurcation of time” and is loosely inspired by Alvin Lucier’s “I am sitting in a room” and of course the sense of history present in the place.