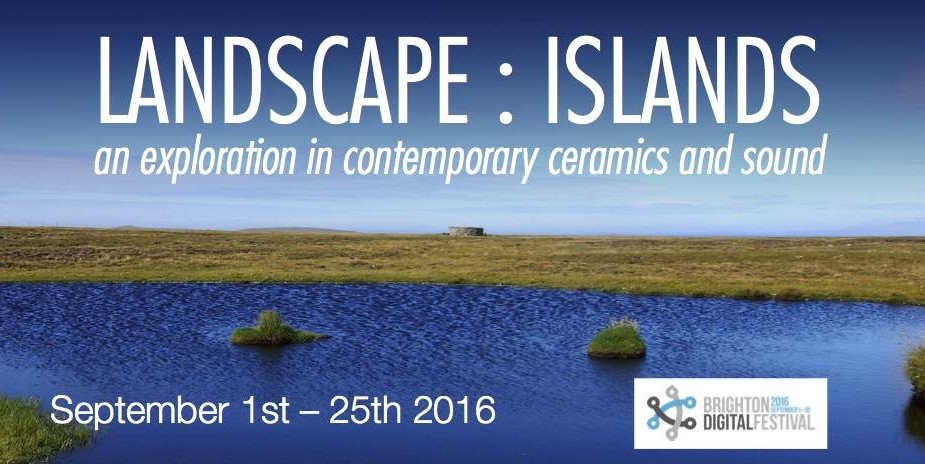 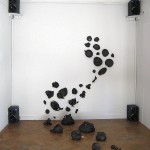 Littoral Assembly is an installation combining ceramics sculptures and 4- channel sound for Brighton Digital Festival 2016. It was developed during a collaborative residency as part of  the Landscape : Islands series devised by Kay Aplin and Joseph Young.

Ingibjörg Gudmundsdottir is influenced by her native Icelandic landscape. The sculptures in the installation are a response to the volcanic stones found on the beaches there. The sound in Iris Garrelfs’ 4-channel composition arose out of a conversation between these objects, Brighton stone and the gallery. Individual sounds were recorded by sounding the sculptures using a violin bow, rubbing them together, drumming onto them with fingers and with Brighton beach stones.

This sound making activity left a trace on the objects – for example the white marks you can see were left by the resin of the bow, reminiscent of salt deposits. In this way, the work of the two artists became more and more entwined: as you can hear the sculptures in the sound, you can also see the sound making process on the objects.

A blog about the sound creation process can be found at http://irisgarrelfs.com/landscape-islands-residency. Further documentation to follow shortly.

A documentary about the Landscape : Islands residency project, produced by Tela Films: