Described as the ‘Diamanda Galas of Glitch’ by BBC Radio 3, Iris Garrelfs’ begun improvising with voice very early on. Her parents sang in the village choir, and would often practice at home with Iris making up new melodies, 2nd and 3rd voices to whatever was being sung. 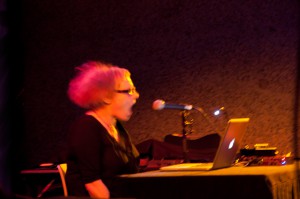 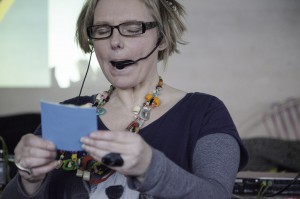 That said, whilst using her voice as raw material, sounds are transmuted into machine noises or “granules of electroacoustic babble and glitch, generating animated dialogues between innate human expressiveness and the overt artifice of digital processing” as the Wire Magazine put it.

She got into the attractions of technology as a teenager, stumbling across her dad’s pulp si-fi magazines. Her exploration of the relationship between voice and technology in improvised performance began in the mid 1990, first using analogue electronic, switching to digital means with Max/Msp in 2000. However, Iris is still waiting for an implant that will siphon off her sonic nerve impulses, fragments of melody, rhythm and correlation floating around in her body and brain.

In the meantime she is working on a voice and movement performance with equipment provided by Goldsmith’s  Digital Studios Embodied Audiovisual Interaction Group (EAVI).

Iris performs solo as well as in collaboration with other artists, for example Thomas Koner, Robert Lippok (To Rococo Rot), Kaffe Matthews, Scanner, Si-cut.db, Jude Cowan Montague, Poulomi Desai  and others. She also play with the improvising group Symbiosis Orchestra.

2. A live recording from Sonic Imperfections