Multilogue was developed as multi-channel sound installation using a selection of interview materials conducted with artists such as Aura Satz, David Toop, Trevor Wishart and many more. It presents a multi-angled dialogue, a blend of views from which the piece emerges at their intersection. The title derives from a contraction of the words ’multi’ and ‘dialogue’.

Brandon LaBelle writes: ‘The voice comes to us as an expressive signal announcing the presence of a body and an individual…’ (LaBelle 2010, p 149). However in Multilogue, the individual is separated from her voice two-fold: Firstly, she it is removed from the physical presence of the interviewee through the process of recording, and secondly the voice is then also stripped of its recorded interview context. Who is it, then, that is speaking?

‘Look at a song’s lyric on the page: whose “voice” is there? Who’s talking?’ asks Simon Frith, thinking in the first instance of the lyric’s author (Frith 1998, p.183). However, when sung, we identify the same text with the singer and his personal interpretation. In rethinking the interview process as improvisation, its content as lyric, and following on from there the spoken voice with its semantic melodies also as singing, we can reconnect the themes through a notion proposed by Norie Neumark where authenticity emerges through performance in which the voice calls ‘the other into an intimate relationship’ (Neumark[ Neumark, Norie (2010). Doing Things with Voices: Performativity and Voice. In: Norie Neumark, Ross Gibson, Theo van van Leeuwen (eds) Voice: vocal aesthetics in digital arts and media. Cambridge, Mass: MIT Press] 2010, p. 96), making itself known. In performance, Roland Bathes material vocal ‘grain’ conveys a personal subtext beyond initial meaning of words, beyond representation, and ‘the performative voice is quintessentially paradoxical in Mladen Dolar’s sense and uncanny in Freud’s sense of unheimlich or unhomely‘’(Neumark 2010, p. 97).⁠3 We hear, but not hear the body through its voice. How much more so in the case of recorded voices?

And although the digital has further and specifically disturbed the authenticity of its voices, the digital relationship with authenticity is itself particularly complex and paradoxical (Neumark 2010, p. 95). A recording is not a ‘truthful’ representation of reality, and whilst digital recording may provide cleaner capture as is the case with analogue technology, they are also more easily manipulated. 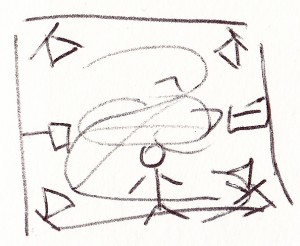 In Multilogue the original utterances are manipulated by selection, by omission, and in using small extracts from longer recordings I am also reminded of Burroughs’ cutup technique. However, rather than using only a few or even just a single word, I include meaningful extracts, and in this I am being led by the material. This process leads me back to the meaning of poetry, and back to an idea of song and lyric, rather than producing abstract sonic soundings.

The final installation is performance, recorded into space and arising in conjunction with it. Here, interviewees remain a ghostly presence, a commenting invisible chorus, in an all-but empty room.⁠4 This room presents itself as a newly created body inhabited by the listener, with voices pulsing through audible trajectories of invisible veins.

Here a low-res example of one of the voices, Aura Satz.

And a second, David Toop 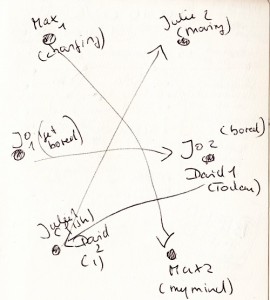 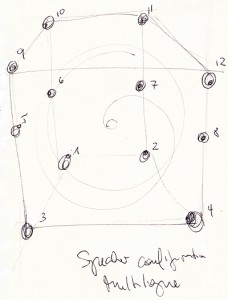 1 I have compared his approach, which I have used on previous occasions when working with field recordings as in Dumplinks (see Chapter 2) for example, as a homeopathic approach where original substances are diluted until only their essence is said to remain.

2 In addition to such conceptual questions an ethical issue presents itself: I re-contextualise artists expressions and recombine them into a new work. Although many artists have used such approaches previously, I decided to request each artist’s express permission to use their recordings in this way.

3 The term ‘unheimlich’ in German carries a sense of alienation, fear arising from the unfamiliar.

4 For this reason, speakers should not be visible in the installation.