Object and Process began life as one-to-one workshops with three fellow artists, Tansy Spinks, Mark-Peter Wright and Dan Scott, trying of get a feel for how sound artists interact with objects through improvisation. The idea to the first part of  Object and Process was prompted by the first practitioner in the series, Tansy Spinks, asking if I considered using the material further. This had not been my intention, but on reviewing the documentation gathered, the inherent juxtaposition between an object (as a fixed, solid thing), and process (as a subjective ephemeral experience) seemed enticing.

The result is a delightfully symmetrical dual aspect project, made up of a screen based sound work called Objects as Process and a series of prints called Process as Object. With the film  my aim was to remove objects from the realm of the concrete and infuse them with properties of process, blurring the boundaries between them. The second part extracted printed images from the film and returned them to the fixed realm, as a series of triptychs.

Tansy Spinks is a sound artist focusing on site specific performance, which frequently incorporates the violin. As a more recent addition to the sound arts community her main professional background is photography, her works can be found in the Fine Art Museum in Houston, Texas and the National Museum of Media in Bradford, for example 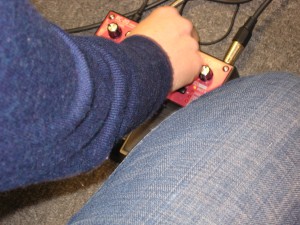 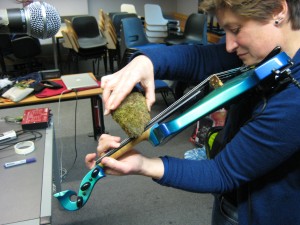 Mark-Peter Wright is a sound artist focusing on field recordings and phonography. In 2009 he was awarded the BASCA British Composer Award in Sonic Art. Wright is also founder and editor of Ear Room, an online publication set up to develop the critical discourse around sound in artistic practice, which contains interviews with many prominent practitioners, such as Hildegard Westerkamp. 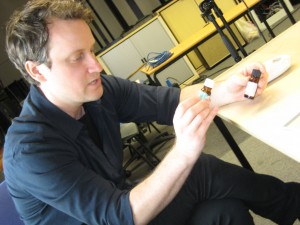 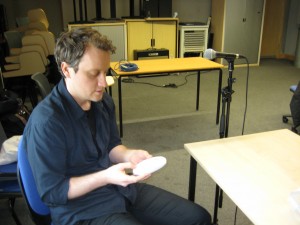 Dan Scott is a sound artist exploring time, memory, modes of listening and the uncanniness of everyday sound[ http://www.crisap.org/index.php?aid=398] expressed in installation and performance.  He is also a musician interested in songwriting and finds it hard to consolidate the the two modes. In our workshop, therefore, we also explored what connections or differences there might be. 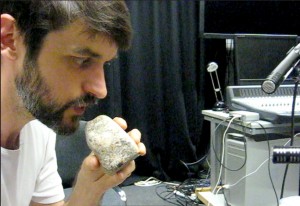 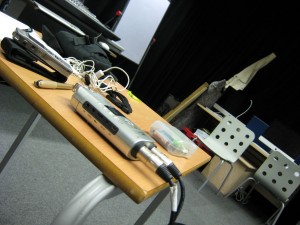 So, the screen version of  Objects as Process is made from material gathered at each of the workshops, encapsulating each artist’s response to the objects I presented them with. It contains 3 sections, one for each of the artists. When watching the extract below, please bear in mind that this film is intended to be watched on a large movie screen, as an experience of audio-visual motion rather than a procession of objects. An immersive, and, dare I say it, almost psychedelic experience of sound, colour and form. So, do watch it full screen, even better, project it onto a big screen or white wall so that the grain of the footage really becomes visible!

As already mentioned, the second part, Process as Object, extracted printed images from the film and returned them to the fixed realm, as a series of triptychs. Here are a few sketches and digital examples of the prints: 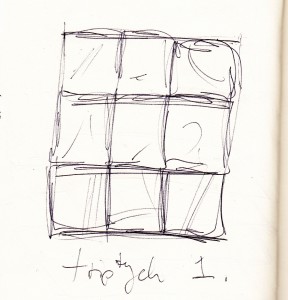 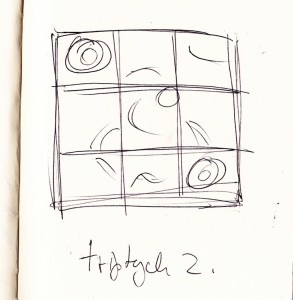