The Lab of Sonic Possibilities is a collaboration between Tansy Spinks and Iris Garrelfs in which they explore locations through listening and sound related activities, uncovering different perspectives on site specificity this reveals.

We were selected for a residency at Wimbledon Space as part of ACTS RE-ACTS Festival, organised by Wimbledon College of Arts (UAL) to set up a debate about contemporary performance in fine art and theatre. It took place from 13/3/14-18/3/14 and Tansy and I had fun exploring collaborative, site specific sound performance through objects and improvisation. We played with similar ideas during a one-day workshop last year (which made it into my piece Object and Process), and it was very interesting to see where this lead to! An interactive closing event took place on 18th March at Wimbledon Space, You can find a film from the night below.

Here is a video from our closing event The Laboratory of Sonic Possibilities:

We received some very lovely comments! A big thank-you to all who joined us for the event, making it possible! 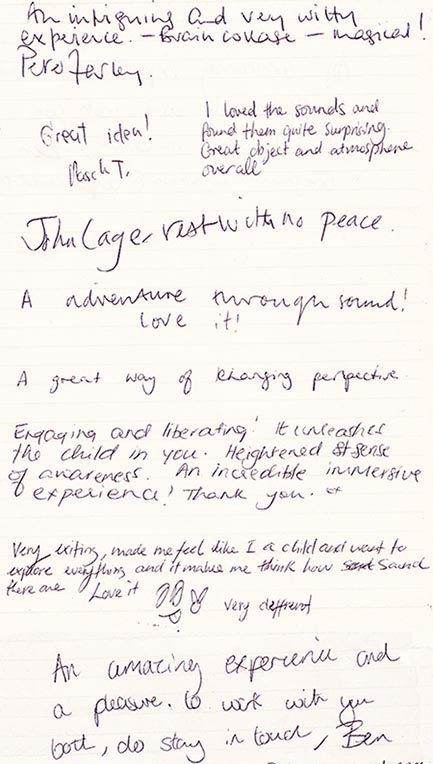 A slideshow from the performance today:

Here an image of our program notes:

Here are a few more images from Day 2, mainly Tansy and Iris improvising with crappy speakers and contact mic:

Day 1: Tansy and I are settling down at Wimbledon Space. Fabulous space, super helpful and kind people! I love the quiet acoustic of the place, each small sound takes on huge significance… We have each brought a few objects along for the other to respond to: Iris: Strawberries, a mini plastic toy violin and a poem. Tansy: A wondrous set of images scores alluding to objects and sound, cut our from locate newspapers, and a tennis racket.

We also go for a little trip around the area and pick up some bits and pieces. What a fabulous day to be doing it on! We pick up some bits from trees, steal some stones from the Wimbledon tram line and purchase a couple of books from a local charity shop. We start making sounds, record, drink coffee, order more contact mics…

And: Instead of ears there will be cones!

You can see a slideshow of what we’ve been up to:

Having discovered that Wimbledon based otologist Joseph Toynbee (1815 – 1866) carried out around  2000 ear dissections in the lifetime, we thought we must, somehow, get hold of 2000 ears of some description. Perhaps we could make a mobile of noise-making ears, made from tin foil for example. Sadly, our quick-fire experiments failed. Perhaps, we thought,  we could get hold of 200o broken headphones instead, but that also didn’t materialise in time. Thanks to all though who responded to our twitter and Facebook messages with suggestions, next time! Nevertheless, we have one other idea… More about that later ( hint: Toynbee cones)!

We are also thinking about objects as scores.

Iris has been busy designing  a flyer for the closing event and setting up a Facebook page. Do join us if you have the time! 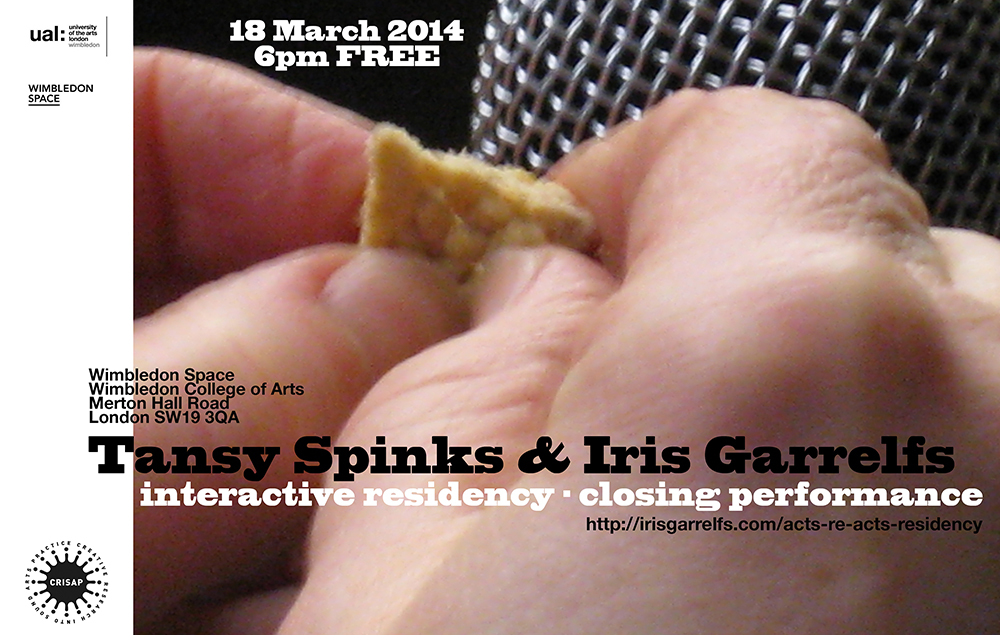 This week, Tansy made a trip to Wimbledon and has this to report:

It may be a bit early, but we have started already! This week, Tansy and I began talking about the parameters we have in mind for the residency. Here are a few miscellaneous notes: